In case you thought running an art gallery was particularly glamorous... 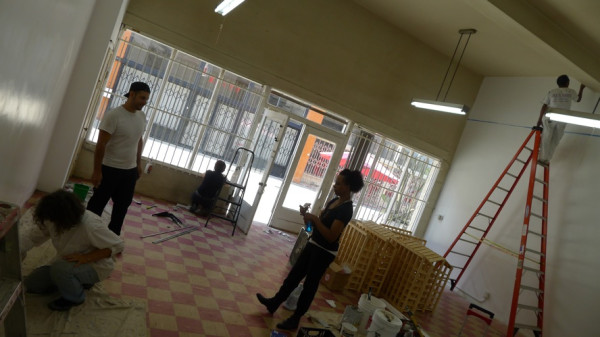 Kim and Her Crew

Kim Dingle and her crew were at the gallery bright and early Sunday morning. Their purpose was to prepare the space for her exhibition that opens on Saturday. The first order of business was to paint the space. The gallery is a former Chinatown market and I had kept some elements of the old establishment. Kim needed to "un-retain" some of these elements. She brought in Augustine, a painter so busy that he could only do the job on his day off. She brought Edgar and Wa, two deaf employees from her restaurant FATTY'S. And of course she brought Aude (pronounced Odie), her partner.

On Sunday they patched, painted, scrubbed, sanded and gave the place a major face lift. Two walls are now painted pink. Parts of walls that had not been painted since the building was built in 1949 - they got three coats of art world white. I deinstalled a pair of bathroom curtains that were hung new in the 1950s. They had a grey stripe in line with the decades-open window that was the history of L.A. smog.

On Monday the work continued. L.A. Packing and crating came by to pick up a large Mark Dutcher painting that had sold and I could breathe easier. Having that around all this turmoil was making me skittish. I learned five ways to say "Valuable, precious painting" in sign language and was constantly making these gestures to the point where i was getting eyerolls from the duo. 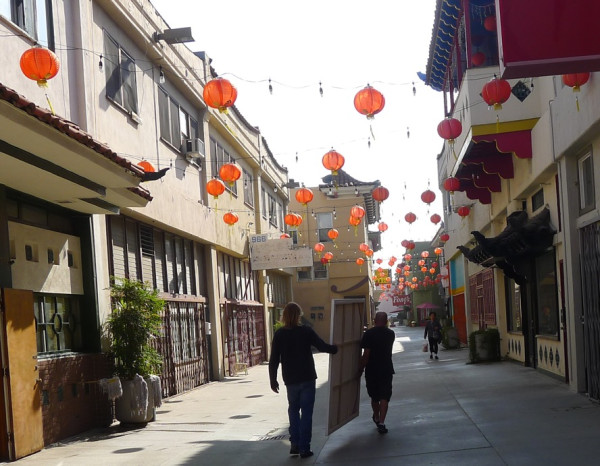 Taking Away The Big Painting To The Collector's House

Then the landlord showed up with a plumber. He rented the upstairs to four kids in their 20s in July and the retail first floor to me in November. We are the first tenants the building has ever had. Family owned and operated since 1949. The plumbing ain't going to last much longer and Mister fixit came and looked around. When the landlord opened the basement, though, I seized the opportunity to go down and look around. How about a 1940s cash register for the show? The landlord had no problem lending it.

I had to get Edgar to carry it up. I am useless in these situations. The doctors have said I can only lift eleven pounds. Everyone is running around, exerting themselves and I am just sitting there, watching the ants work, watching life go by. Going to the hospital last year really made me hear the ticking of that mortality clock. No matter how good the prognosis - and it is good - reminders that the merry-go-round stops pop up all the time. All I can do is see them as signs on the highway and open the sun roof. But still, to sit there and feel useless is grating. But come see the cash register in the show this Saturday, a small symbol that I was useful to the process of a major contemporary art installation.

Tuesday the UPS guy dropped off some parts for Kim's installation at a neighbor's. I got there and picked up the box. Too heavy for me to carry and too far to do anything but start carrying it. Kim calls as I am huffing and puffing slow steps with the box on my way toward the gallery. She insists I halt and sends Edgar to find me. He brings a furniture dolly and takes the box at my side, lifts it up and is shocked and confused to find it lighter than a feather. I don't know sign language for "I had heart surgery in December" so I just point to my chest and make a sick face and he seems to get it.

And so Edgar and Kim begin assembling the installation. It is a contraption of her wicked imagination - chopped and scattered baby crib parts haphazardly assembled into of all things, a wine bar. There is more work to be done in her studio and she leaves before traffic. I lock up and walk out - holding keys is about all I can contribute until there is art to be sold. I pass a film crew shooting a shoe commercial and stop to chat with Jody the Location Cop. She has a company that rents out Chinatown as a locale to filming crews. This stops runaway production that can annoy neighbors and also protects the crews from being shaken down by savvy locals. And Chinatown is nothing if it isn't brimming with savvy locals.

Jody is talking with a furniture dealer about the need to water the plants on Chung King Road. This is the guy who yelled at me about a mural of a topless woman that hung outside my gallery. It was there for a month and a half and one guy voiced his offense by claiming that everyone on earth was offended by it. I just smile at confrontation. It takes way more to wake up the dragon. I do let them both know that I won't be watering any plants on the road, to Mister Furniture's disappointment. Since ideas for making the street more lively are being bandied about I let Jody know that I am interested in a kids ride being installed out in front of my gallery. Mister Furniture says "Oh no, those are bad" so now I am getting a ride put in one day soon for certain. I sold about $20,000 worth of art in the past three weeks but it is time to focus all my attention onto coin-operated children's rides. Hey, it is up to fifty cents per ride these days. Jody makes a call. She may not be the mayor of Chinatown but she is its rolodex; she may not even be Chinese, but she knows everyone. You hand fifty bucks to a rent-controlled impoverished Chinese grandmother a few times and the goodwill flows around town.

Jody is talking to Tony, the guy who owns all the rides in the Gin Ling Plaza. We're in Chung King Plaza. It is kind of the ghetto plaza. All the security gates are pulled shut and it looks abandoned. Because it kind of is abandoned. Art galleries tend to be internal. The visitors who matter already know we are here and venture forth accordingly. The general public might stumble upon us but they stick mostly to Gin Ling and its tourist gift shops and restaurants. Gin Ling has the kiddie rides. I want a ride in front of my gallery to be antisocial to those who want to walk around Chinatown and tell others what to do, little emperors with no authority beyond their mouths. I also want it in the hopes that maybe Chung King Road would be a little more active. And of course, the irrationality of a kiddie ride in front of an art gallery is irresistible. You will find the pull of irrationality becomes the heartbeat of your existence if you stay in the art world long enough.

Tony told Jody that two guys were in the central plaza cleaning and de-coining the rides. I sprinted over. I explained that Tony had sent me and that I wanted a ride. My landlord had shown me the building's external outlets and we had plugged a band and deejay in there for opening parties. But about a month ago he had told me that he had installed these himself to code in the 1970s specifically for kiddie rides. So within an hour of Dingle leaving I am watching the guy open his truck to show me the rides that he has available. No ID, no discussion of terms, I didn't even open the locked store, it was just "okay, have one" from the start. I just showed him where i wanted it and he showed me what he had in the truck to pick from. And right there was a pink jeep with yellow flowers. 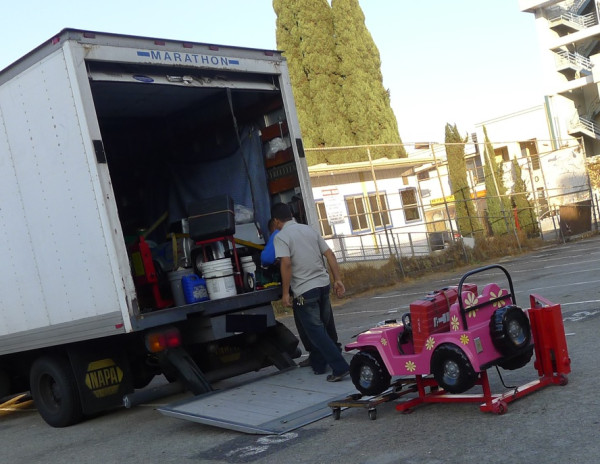 Kim Dingle's art is about girls. Her iconic images are girls dressed in their Easter Sunday best beating the shit out of each other or out of something. To have a pink jeep kiddie ride installed outside of a gallery hosting a Kim Dingle solo show would seem to be an obvious art piece in and of itself. My fellow Chung King Road gallerist Tom Jancar asked me exactly that when he saw the crew with their oversized jackhammer finishing up the simple installation. A hole jackhammered in, a bolt glued into that, a giant locked chain attaching the kiddie ride to the bolt is fastened and then, finally, I am asked to sign a piece of paper.

I dropped fifty cents in and watched the pink jeep bob up and down, empty, for a solid minute. Her show is called "Wine Bar For Children At Mister Ling's Market" (CLICK TO READ THE PRESS RELEASE). I am not sure of the narrative of this wild tale of little girls overtaking a wine bar, but I believe that if they need a getaway car, I had it installed this afternoon, in time for Saturday's opening.

I texted Kim and she texted me back that my name oughtta be "Lucky". I was just glad that the case could finally be made to call me "Useful". 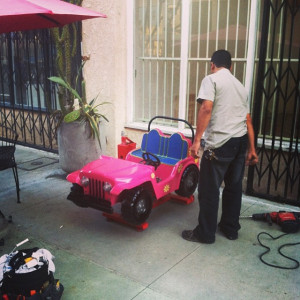